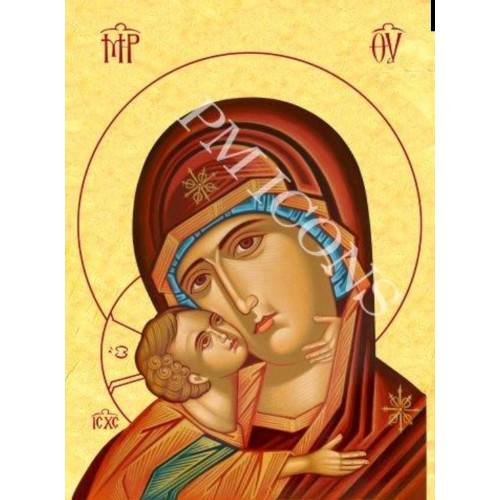 The Virgin Mary bends her neck to embrace tenderly her loving Son, Who though just a child on earth, is at the same time the Lord of Lord and King of Kings.  She looks both outwardly and inwardly, for the Lord said, “the Kingdom of God is within you” (Luke 17:21) and yet she still holds this Divine Child in her arms.  In the expression of her eyes and mouth we see joy and gratefulness, love and a secure relationship.  The Lord looks up with trust and much compassion as His cheek touches hers endearingly.

This is not a mere human relationship but one that acknowledges the mystery of God becoming man, and the mystery of the culmination of the yearning of mankind for God.  It says in the Vespers service for the Eve of the Nativity of Christ, “The undefiled Virgin, beholding the pre-eternal God as a child that had taken flesh from her, held Him in her arms and without ceasing she kissed Him.” This icon shows that very idea in visual form.