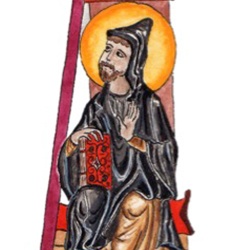 Most of what we know about St. Benedict comes to us from the writings of Pope St. Gregory the Great – a Benedictine Monk before accepting to become Pope.

These writings are based upon stories told by others who had known St. Benedict personally. Benedict was born in Nursia, northeast of Rome. The traditional date of his birth is 480 AD. Benedict was sent to Rome for his schooling, and it was there that he experienced a conversion that led him to renounce the world, and its values. Following his conversion, he lived in solitude in a cave at Subiaco, for three years. After these years of solitude Benedict won many disciples and established twelve monasteries. From Subiaco, Benedict went to Monte Cassino, south of Rome, and from Monte Cassino, wrote his Rule for Monks.

The two references to Benedict’s sister, Scholastica, are found in the writing 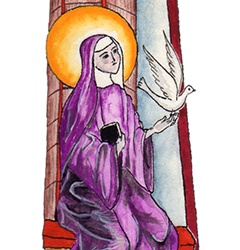 s of Pope St. Gregory. A meeting between brother and sister, as recorded, was spent in prayer together and in conversation about the things of God.

On the occasion of such a meeting St. Gregory records, Benedict announced his departure and began to farewell his sister. She pleaded with him to change his mind as she believed it would be their last meeting on earth. Benedict refused her request and seeing that she could not change his mind she began to pray for intervention. This came in the form of a violent storm which prevented Benedict and his monks returning to their monastery. Benedict reprimanded his sister to no avail, for her love had triumphed over the Rule in this case. The only other reference to Scholastica is St. Benedict’s vision of her death, when Benedict, while at prayer, saw the soul of his sister ascending to Heaven in the form of a dove.

St. Benedict is known as the father of Western Monasticism, and the patron of Europe. He died in 547 AD. His greatest witness is the Rule he wrote for monks, which is a radical Rule, a Christological Rule and a wisdom rule. It is radical in the call to renounce everything to follow Christ, it is Christological in its absolute preference for Christ in every person, every situation, every moment of life. It is wise in its understanding of human nature, and its preference for love of and reverence for one’s community.

See the following links for more information on the Benedictine Order: