View cart “LAUDATO SI’ ON CARE FOR OUR COMMON HOME” has been added to your cart. 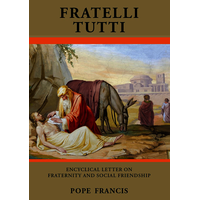 “Issues of human fraternity and social friendship have always been a concern of mine. In recent years, I have spoken of them repeatedly and in different settings. In this Encyclical, I have sought to bring together many of those statements and to situate them in a broader context of reflection. In the preparation of Laudato Si’, I had a source of inspiration in my brother Bartholomew, the Orthodox Patriarch, who has spoken forcefully of our need to care for creation. In this case, I have felt particularly encouraged by the Grand Imam Ahmad Al-Tayyeb, with whom I met in Abu Dhabi, where we declared that “God has created all human beings equal in rights, duties and dignity, and has called them to live together as brothers and sisters”. This was no mere diplomatic gesture, but a reflection born of dialogue and common commitment. The present Encyclical takes up and develops some of the great themes raised in the Document that we both signed. I have also incorporated, along with my own thoughts, a number of letters, documents and considerations that I have received from many individuals and groups throughout the world.” — Pope Francis (Fratelli Tutti, Page 9)