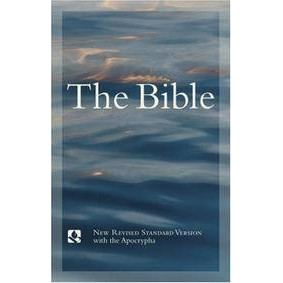 Enjoy the New Revised Standard Version’s clear, concise temporary, literal translation of the Bible in convenient softcover. Translated by a multi-denominational committee and based on the original Hebrew, Greek, and Aramaic texts, the NRSV is widely used by English-speaking congregations throughout the world.

This affordable edition includes the NRSV translation of the Apocrypha, a collection of books found in the Septuagint — the Greek version of the Jewish Bible. Though not incorporated into the final, canonical version of the Hebrew Scriptures, the Apocrypha was included in important Bible translations such as the Latin Vulgate and the original King James Version of 1611. Woven throughout the liturgy of Protestant, Catholic, and Orhodox churches, the writings of the Apocrypha have had a significant influence on Christian art, literature, and theology.