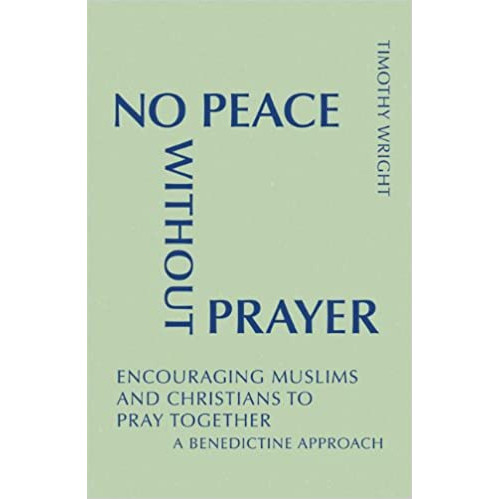 NO PEACE WITHOUT PRAYER

Encouraging Muslims and Christians to Pray Together – A Benedictine Approach

Abbot Timothy Wright proposes sowing a small seed from which might grow a greater respect between the world’s two largest religions, Christianity and Islam. Indeed, he believes that the seed has been already planted. Christians give unique value to their revealed Scriptures as the “Word of God.” Muslims speak of the Qur’an as God speaking to them.

In No Peace without Prayer, Wright presents the case to establish groups of Christians and Muslims dedicated to sharing their respective Divine Word in ways that enhance the “other” to gain a greater mutual understanding. The key word, says Wright, is partnership, arising from their shared belief in the One God, creator of the universe, communicating with the human world and merciful to the repentant.

Abbot Timothy Wright is presently a spiritual director at the Beda College in Rome and the delegate of the Abbot Primate of the Benedictine Confederation for Monastic-Muslim Relations. He served as abbot at Ampleforth Abbey from 1997 to 2005, during which time he and Mohammad Ali Shomali organsized a series of dialogues between Catholic monks and theologians and Shi’a Muslims from Iran.