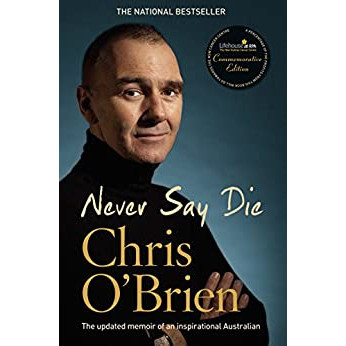 The updated memoir of an inspirational Australian

It was a cruel twist of fate: in November 2006, Chris O’Brien, one of the country’s leading head and neck cancer surgeons, was diagnosed with glioblastoma multiforme, an aggressive and almost inevitably lethal form of brain cancer. As he knew, few sufferers survive past 12 months. Nevertheless he was determined to do what he could to beat the odds.

With the support of his close family, O’Brien took the option of radical brain surgery five times under the supervision of his friend, neurosurgeon Dr Charlie Teo. As told here in his warm and lively memoir, he faced the terrible toll of cancer and its treatment with an uncommon grace, declaring, “I’m not frightened of dying. I’m at peace with my situation.”

In June 2009 after living with cancer for two and a half years, Chris O’Brien passed away. To the end he was optimistic and generous, relaying his energies into fundraising for an integrated cancer centre, Lifehouse, at his beloved Royal Prince Alfred hospital. Honoured as an Officer in the Order of Australia, he was described by Prime Minister Kevin Rudd as “a truly exceptional Australian”.