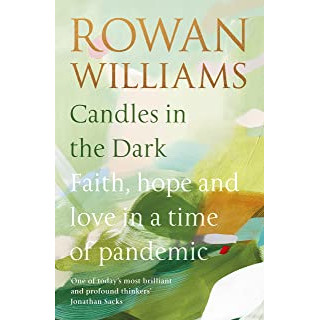 CANDLES IN THE DARK

Faith, hope and love in a time of pandamic

From March to September 2020, Rowan Williams wrote weekly meditations for the congregation of his parish church. Now, this timely book makes those meditations available to a global audience, offering hope and encouragement as we navigate the most devastating crisis for more than a generation.

Candles in the Dark will be welcomed by all who are looking for light in these dark times. Written with warmth and compassion, it will challenge you, nourish you and leave you with fresh resources for faith to guide you through a still uncertain future.

Born in 1950, Rowan Williams was educated in Swansea (Wales) and Cambridge. He studied for his theology doctorate in Oxford, after which he taught theology in a seminary near Leeds. From 1977 until 1986 he was engaged in academic and parish work in Cambridge, before returning to Oxford as Lady Margaret Professor of Divinity.

He became Archbishop of Canterbury in late 2002 with ten years’ experience as a diocesan bishop and three as a primate in the Anglican Communion. As Archbishop, his main responsibilities were pastoral — whether leading his own diocese of Canterbury and the Church of England or guiding the Anglican communion worldwide.

A the end of 2012, after ten years as Archbishop. he stepped down and moved to a new role as Master of Magdalene College, Cambridge, from which he retired in September 2020.

Professor Williams is acknowledged internationally as an outstanding theological writer and teacher as well as an accomplished poet and translator. His interests include music, fiction and languages.