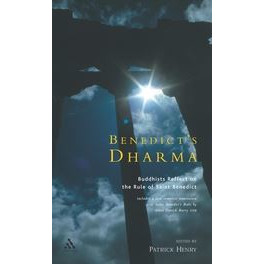 Buddhists Reflect on the Rule of Saint Benedict

The book was written in honour of His Holiness Tenzin Gyatso, the Fourteenth Dalai Lama and in memory of Thomas Merton, OCSO Monk of the Abbey of Gethsamani. Their meeting in 1968, shortly before Merton’s death, marks the beginning of sustained Buddhist and Christian monastic encounter.

“Benedict’s Dharma combines the thrill of watching a dazzling performance with the secret pleasure of eavesdropping on a private conversation. In commenting on the Rule of Saint Benedict, the contributors are not trying to say anything new or startling, yet, for that very reason, they do. I am deeply grateful for this book.” — Brother David Steindl-Rast OSB