The Monastery of our Hearts

The Artist And The Monk

In the rubble of your resentments, grudges and hostilities there is a small box hidden in the corner of your heart covered with dust and debris. Inside the little box are three things: a memory of laughter, a fish, a vision in a seed. Above all the rubble there are searchers with sniffer dogs keen to find that little box because they know it used to be, and still is alive, even though faintly a breath. 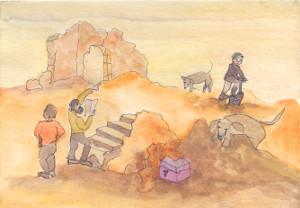 Developers also walk the site above, marvelling at the ruins of the monastery. ‘What a splendid venture! We’ll make a tourist stop here and become rich. People will pay for the memory of the chant and the imagined figures who used to pray here. There’s a big rock over there where they can place their letters of petition. We can charge them entry. No one will answer their pleas now that the prayer has been silenced by the noise of discontent and conflict.’

What has happened to the prayer of your heart in all the worldly noise?

It became cloudy and overcast, threatening endless rain. The rains did come and the whole area of the ruins, rubble included, was covered with water. Nothing was visible anymore in the relentless downpour. It stayed that way for a very, very long time. 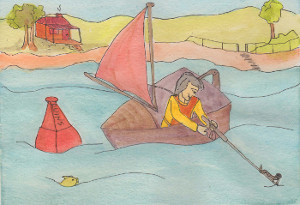 Lucy decided to take her little boat out on the lake one sunny afternoon. She put in her rod and fishing tackle and hoisted the red sail. The mirror glided across the glass, with a freshening breeze filling the sail. She came to stop just south east of the old buoy they called the ruins. This was where the old monastery ruins were, down deep below the darkened waters.

Down went the sinker with the hook and the wriggling bait. Lucy wanted to catch a fish because her friends were coming for dinner that evening and she wanted to share her catch and laugh with them and dream their dreams around the open fire in her cottage she called ‘faith’.

She waited; not a nibble. She sang songs; not a nibble. She looked long at the horizon. Not a nibble. So she started to wind in the line and felt the sinker strike the bottom, caught on a snag! No matter how hard she tugged and pulled and let go and jiggled it, she couldn’t free it. One last try before I cut the line, she thought. She prayed a prayer to her friend who always helped fisherwomen in strife like this. Bingo! It became free and she reeled it in and a great reedy mess landed in the boat. Lucy headed home as it was late and she had nothing to cook for dinner. It was always a heartening sound when the boat rushed up against the gravelly sand. Home at last!

As Lucy was separating the reeds of her catch, there was a little rock… or so she thought, but she discovered it was a muddy box- shaped vessel. She washed it and it began to gleam in the sunlight. It filled her with delight and a deepening silent serenity. She called the little box Julian. There wasn’t a key and the latch had rusted hard. She took it inside her cottage and placed it above the hearth.

Her friends came in, all laughing and singing. They had been to the markets. They brought in a big fish and Lucy laughed; her friends had provided what she couldn’t manage herself. They all sat down around the fire, Lucy, Peter, Gillian, Como, Zing Iee and Herbie. They shared the stories of their day and recounted how their hearts whispered encouragement, hope, kindness and gentleness in their dealings with the people and creatures they met. Lucy told her story, and placed the box in the middle of the group. Zing lee loosened the latch on the box and it opened. They couldn’t see much in the box. Well, a memory of laughter can’t be seen really, it’s felt isn’t it? And they did feel it. It was warm and lighthearted and filled them each with a delight in the other. 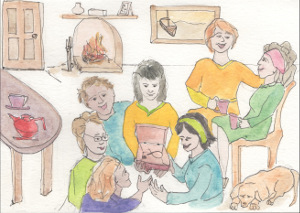 The fish was there too, a symbol carved into the base of the box, a simple line drawing. They knew the symbol; it was from the old monastery. Gillian had discovered it in her archaeological studies. It was an ancient symbol of peace. The seed rolled from one end of the box to the other and Herbie the horticulturist picked it up. ‘I’ve never seen the likes of this species before’, he said. They all got excited at the thought of planting it. Lucy got her spade and they gathered together outside for the ceremonial planting.  ‘Here we lay this unknown seed into the soil of our friendship and laughter. May it come to life in us again, a vision of hope with softening splendour; a tree to shelter us from storms and shade us from the heat of scorn and judgement’. Then they sang together, ‘We hope to see the day and hear the chant echoing peace in the hearts of those who seek it’. Over and over they chanted this hymn. It did seem to bring peace and, you know what, I believe the monastery is reborn in our hearts when we hope and pray and let the rubble soften into the watery depths.