No, they did not appear as heroes galloping into town on their horses in all their macho magnificence! Rather, they seemed to just suddenly be there… seven, silent ethereal figures emerging from the fog that wrapped us round as we gathered for Eucharist. A gasp of delight from one of us alerted the rest of us to their presence. We all turned to investigate, scanning the paddock made visible by the huge glass wall behind our altar. Seven stately sentinels was how I perceived them.

Image of Kangaroos in a foggy day

Inspecting them more closely however, I am ashamed to admit that I disparagingly dismissed them as “only wallabies”. Then something made me take a third look. A huge red he was, the largest of them, casting any doubt from my mind. Kangaroos they were! Had they sensed a “presence” I wondered? Did they even notice us? They seemed to be silently observing us whilst we were observing them! All outside was still as we refocussed on what was really about to take place, the miracle unfolding on the altar before us.

Later in the morning whilst working in my cell I glanced momentarily out the window… as is my want occasionally. I was stunned to see my “magnificent seven” grazing in the paddock only metres away. Five of them continued to graze but two stood staring directly at me. Without being really aware of it my intellect tuned in, interrupting my awe. It focussed on theology. Seven appears everywhere in the bible I thought. The most sacred number to the Hebrews it also appears throughout the book of Revelation. It denotes completeness and perfection. Is there a message here for us now and of so what is it I mused? On and on went my thoughts relentlessly, unceasingly, noisly.

STOP! The voice was both urgent and insistent. “Vanity of vanities, all is vanity”. (Ecclesiastes 1:2). Stop theologising, stop intellectualising, stop philosophising! Recognising the voice as that of my deep and true self, the self that lives in awe of God, that loves God and desires God, I stopped. And I knew what I needed to do; I needed to move out of my mind and into my heart. I needed to simply stand in awe of God and praise him for the magnificence of this creation of his. Yes, it was a magnificent seven but it was God’s magnificent seven. The response I needed to make was to BE PRESENT to the moment. 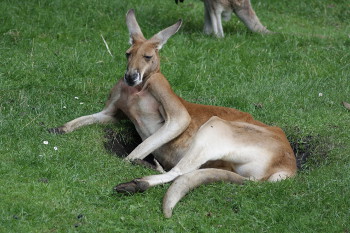 Image of a resting Kangaroo

Trusting it completely, I obeyed that voice and simply sat beholding what was before me. Immediately peace invaded my whole being; the peace that comes from simply resting in God. Realising how easy it is to be dragged away from it I claimed the Sabbath Rest.

From the Recessional Hymn for Common of Virgins