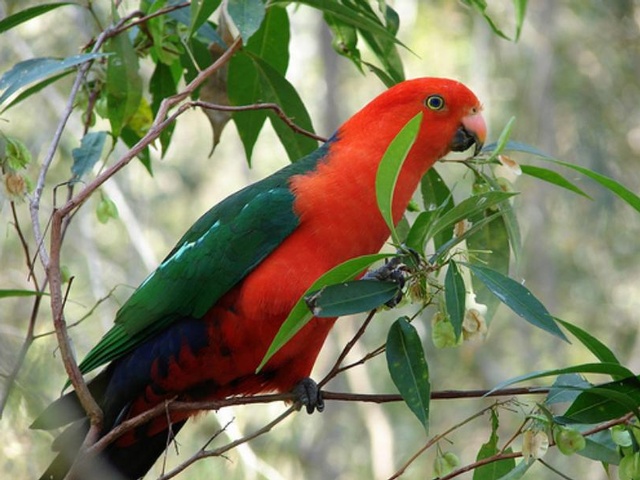 As I walked into our Church for Middle Hour one day not long ago, a sister who was already sitting there motioned to me to look out the window to the beams which support the overhang of our Church roof. Her face was alight with excitement and I knew there was something special going on. I turned to look, but I must confess that no sense of anticipation had prepared me for the breathtaking sight I beheld. Seven king parrots had taken up a resting place on the various beams and were quietly, so it seemed to me, waiting for us to begin singing. Seven king parrots is a very remarkable and unusual sight, at least at Jamberoo, but I imagine elsewhere too.

It reminded me of a similar experience about eight years ago when, over the October long weekend we were having 40 hours of continuous Adoration of the Blessed Sacrament leading into the Feast of Christ the King. The Blessed Sacrament had been exposed and two king parrots had stayed on those same beams the whole day. My intuition back then was that they sensed The Presence and wanted to stay close. It almost seemed as though they had joined in our adoration. Everything was silent and still.

This time there were seven king parrots and, apart from the exquisite beauty of their red breasts, what had also caught my attention was the fact that there were seven. Seven is, of course, a significant number in the Bible and there is much that could be inferred by that fact. But this was not what I was focussed on. Rather, it was the fact that there were three “couples” and “one alone”. What about the one alone? Where was its mate I wondered? Had something happened to her? And how did he feel, being alone?

As I settled into my stall in choir I watched the parrots, musing on how poignantly beautiful is the bond between a couple, whether it be that of birds or human beings. As a nun I am enormously uplifted to see couples in our church as they join us for Mass. Their fidelity and their love for each other radiate out and have a way of supporting me in my vocation to celibate living. It totally enriches me.

However, now I was really drawn to the “one alone”. As my heart melted with compassion for him, I felt a growing awareness that there was something deeper to contemplate. It was a sense that the one without a partner (be it a bird or an animal or a human being) has a beauty all their own and that something powerful is happening within the context of that aloneness, just as there is something powerful happening within the context of a deeply committed relationship between a couple.

The seven king parrots flew off before we finished Middle Hour but the “one alone” had left me with a gift. I am still listening for what the fullness of that message is, but what I do know is that the one who is alone is not to be pitied. Reverence is the response. Something within the aloneness is unfolding and God is at the very heart of it.

As we processed from the Church I glanced at the now empty beams and gave thanks for the gift of the “one alone”. I was not left empty like the beams, I was filled!