The Colour of Dust

“Remember man that you are dust and unto dust you will return”
Genesis 2:7

Dust is usually something we consider must be ‘dealt with’. We sweep it away; brush it off our coats; dust it off our furniture; sweep it under the carpet; bathe it from our eyes; shake it from our feet if we are not welcomed in a town. We see it as a nuisance, an intruder, an irritant. Yet, as Fr. Paul reminded us today (Ash Wednesday) dust is that of which we are made; God chose dust as the medium through which he would breathe life. The liturgy tells me to remember that I am dust, and unto dust I shall return; that we are all made of dust and will all return to dust; however, this Ash Wednesday, a new perspective opened for me as Fr Paul spoke about dust, because he outlined its positive aspects.

And so, thoughts about dust and returning to dust were vividly present to me as we assembled in the cloister the next day to receive the body of our Sr. Mellitus, who had died the previous Sunday night. Following the coffin in procession into the Church in preparation for our all-night Vigil prior to her burial, we sang the Sucipe, that same prayer each of us uttered on the day of our Solemn profession:

“Receive me Lord according to your promise and I shall live
Do not disappoint me in my hope”.

As I reflected on dust and death and on death being a return journey our bodies make to where they originally came from, I recalled an excerpt about dust from my mother’s precious memoirs. (We had cajoled her into writing them, which she did in her 80th year and six months prior to her own death). A city born and bred girl herself, she wrote of her early years as the wife of a wheat and sheep farmer in a small country town.

My sister and I were two and three years old at the time of this incident from the memoirs. Mum had glanced out the window one day during the terrible drought of 1946, to see a large wall of red dust in the west and her heart filled with dread; she knew what was about to come. Racing outside, she gathered my sister and myself into her arms and carried us into the house, then raced back outside once more to retrieve whatever she could before the dust storm struck. And strike it did, leaving a trail of destruction in its wake, but, thankfully, sparing our lives.

It was when assessing the damage with our father after it was all over that she realized she had forgotten to put the lid back on the furfy. (A furfy was a large water container which, because of the drought, had to be filled once a week from the “Government dam” some miles away and painstakingly brought home where it sat on the verandah holding its precious cargo.) The water, an exceedingly precious commodity, had to last a week, but now it was useless… covered in red dust! “One more day without water” she whispered to herself as she squared her shoulders to face whatever was to follow.

In English we have a saying: …when the dust settles… by which we imply that after the disturbance is over comes peace and calm. It certainly did that day of the dust storm… the stillness was almost deafening recalls Mum. Yes, red dust was an unwelcome intruder in those days.

Yet… God made us from the dust of the earth and he called the first man Adam, a name that literally means red dust! God made Adam out of red dust and breathed life into him, says the book of Genesis.

I was not sure at all about where these reflections were taking me until 1st Vespers for the Common of the Dead, which we celebrated the afternoon before Sr. Mellitus’ funeral. It was Mother Mary who read the following words from Caryll Houselander as we contemplated Sr. Mellitus’ coffin before us in the centre of the choir:

“Our dust continues to pay homage to God
until the endless morning of resurrection,
wakens our body glorified”.

Yes all of the created world is holy, even, or perhaps especially, dust. Because we are made in the image and likeness of God perhaps we could see ourselves as “stardust”. Maybe dust is not such a bad thing after all.

And so I set myself the task of restraining myself when I am tempted to regard someone, particularly someone I live with, as “a nuisance”; when I would like to dust her off my coat or sweep her under the carpet; when all I see is a red dust storm rather than “stardust”. No matter how many faults and weaknesses we have, in reality we DO shine with many star qualities such as kindness, gentleness, sense of humour, generosity, spirit of service, gift of prayer. There is always some shine, even in the most difficult of characters. As followers of Christ we must be impelled to look for, and relate to, that which is good in the other, to their “star quality”.

And I also set myself the task of trying not becoming a dustorm myself; a nuisance to be sweep under the carpet; an irritant to those I live with. But rather, as Mother Mary often points out to us, to try to make myself lovable so that it is easier for others to love me. After all, Jesus expects us to love one another as he has loved us and I am sure he sees every single one of us as “stardust”.

So this Lent, perhaps we could try to see those with whom we live closely from that point of view, rather than have our vision clouded by a red dust storm.

“The stars shone in their watches and were glad;
God called to them and they said, “here we are!” Baruch 3:33-35 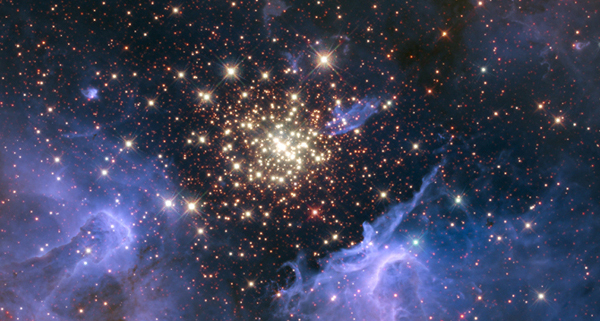 “Every ingredient in the human body is made from elements forged by stars. So are all of the building blocks of your food, your bike and your electronics. Similarly, every rock, plant, animal, scoop of seawater and breath of air owes its existence to distant suns.”