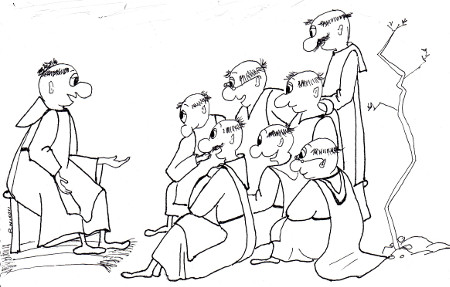 In the context of a whole life of prayer, the role of the 'abba', the spiritual father, was vital, literally, that is to say, 'life-giving'. The abba was the one who, really knowing God in his own experience, could most truly intercede for his sons. He was the one who discerned reality and whose words, therefore, gave life. The key phrase of the Apophthegmata is, 'Speak a word, Father'. This recurs again and again, and the 'word' that was sought was not a theological explanation, nor was it 'counselling', nor any kind of a dialogue in which one argued the point; it was a word that was part of a relationship, a word which would give life to the disciple if it were received. The abbas were not spiritual directors in the later western sense; they were fathers to the sons whom they begot in Christ. A monk had only one abba, and he was not continually discussing his spiritual state with him.

A monk once came to Basil of Caesarea and said, 'Speak a word, Father'; and Basil replied, 'Thou shalt love the Lord thy God with all thy heart'; and the monk went away at once. Twenty years later he came back, and said, 'Father, I have struggled to keep your word; now speak another word to me'; and he said, 'Thou shalt love thy neighbour as thyself'; and the monk returned in obedience to his cell to keep that also.