As well as being a grazier, my father also had a Stock and Station Agency in partnership with two of his brothers… which meant he held fortnightly sheep sales. By this time we had moved from the farm into town to live and my mother would bake scones each sale day and take them to the saleyards at morning tea time for “the men”, “The men” were my father and the sheep buyers who had come down from Sydney to buy livestock (as well as anyone else who happened along… she made lots!). To this day the sound of a dog barking immediately conjures up for me the sight, smells and sounds, the dust and flies and the sheer energy and excitement of the fortnightly sheep sales. I love it!

So, Pope Francis saying that the priests and bishops need to smell like the sheep causes me to smile inwardly. Smelling like the sheep isn’t such a bad thing at all from my point of view and obviously Pope Francis thinks so too. It speaks of earthiness, of goodness, of simplicity and of a connectedness with the realities of life. This has made me think some more about whether it is not just the bishops and priests who need to have the smell of the sheep. Maybe we all do.

What would that mean for those of us who are not priests and bishops I wondered? We are the sheep, but are we really among the sheep. DO each one of us have the smell of the other sheep on us? I found myself very challenged by this thought when I related it concretely to the people with whom I live and with whom I work and pray, as the Pope asks us to do.

I think this is really about being prepared to be one of the crowd, being prepared to get in there and roll up our sleeves and serve; to enter in to the pain each one of us probably often carries by herself or himself; to try to see things and feel things from the other persons’ point of view; to be ready to take risks in relating by reaching out, even if it may mean rejection. Maybe what is wrong with our Church today is precisely this: that there are so many of us who no longer smell like “the mob” (of sheep) because we are disconnected from the pain and difficulties of weak, diseased and sick sheep. Maybe the crisis in our Church at the moment is a “wake up” call for all of us to BE CHRIST to every other one of the mob, to care for others and their needs before our own, as St Benedict urges us to do and as Pope Francis is urging us to do.

I also suspect there is an even more challenging and threatening aspect to this though… at least for those of us who like to feel as though we “have it all together”. I am referring to our capacity to RECEIVE when we ourselves are in need; indeed the capacity and the humility it takes to recognise that we too are actually just one more smelly sheep among the mob; or even a sick and diseased sheep; or maybe even a lost one.. We like to be special perhaps? To place ourselves outside the mob and just go in and out when necessary to give help to the weaker ones? To patronise? To fear, and to thus reject, the “lost sheep”? To be too afraid to look at how we too may have contributed to the mess?

Even remaining silent is actually a powerful ‘word’.

There is something happening, a seismic shift at the heart of our culture and also at the heart of our Church. We are being challenged. Are we prepared to read the signs of the times? Do we have the courage to dive in to the midst of the mess and admit that we have all contributed to where we are at? DO we have the courage to cry out against the selfishness and greed which informs and motivates big business, governments, and individuals who seek power, who oppress, discard and throw away what is sick defenceless and diseased?” And perhaps, as Holy Week begins, we could even ask ourselves how willing we would be to follow Christ by being prepared to die for the other, if such a sacrifice were asked of us. (This may not necessarily mean a physical death of course).

I read recently an editorial in which the following words were said of Pope Francis:

“He understands he has been commissioned by God to cry out to his sheep,
to lead them, to show them how to live. Get up! we can almost hear him saying.
‘So you have fallen-so what? Start again!”
(Catholic Weekly 17-18th March 2018)

Sheep stay together, are a flock (unless you are in Australia and then it’s a mob… even a weird mob as John O’Grady hilariously called us in his famous book). If you are lost and separated from the mob come back! If you feel rejected by the mob cry out! If you are inclined to be patronising climb off your high horse and get in amongst it all. There is something happening, we know not what. We must listen, act, get up, form community, take responsibility for the mob by getting in there amongst them. Cry out, bleat on behalf of others, especially those on the margins. Don’t wait for the 2020 Synod… start now. Become a smelly sheep. 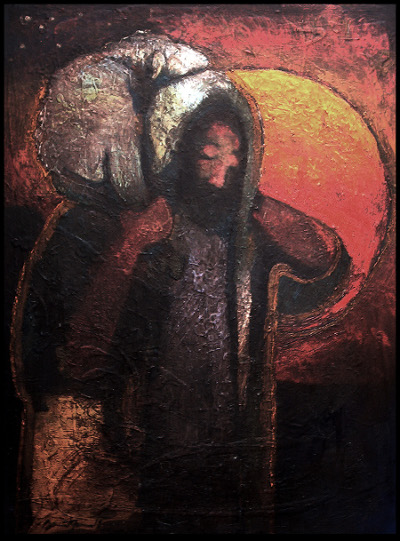 The Lost Sheep by Daniel Bonnell