Little boys love to roll stones that are made of glass and called marbles; so do little girls. They also love to “skip” stones across the water. Sometimes they even love to throw stones at someone who annoys or threatens them. But hopefully, most of the time, rolling or throwing stones is simply an innocent game children play. I wondered though… is it also a game adults sometimes play? That I sometimes play; or at least that part of me/us which is still a little girl or boy?

This sobering thought inched its way into my mind as I was contemplating the state of our Catholic Church in Australia at the moment. It seems to me that there are stones being thrown in all directions, causing pain, hurt, fear, and confusion. The kind of stones I am thinking of are the stones of prejudice and of prejudgment; the stones of presuming guilt until innocence is proved; of vicious words, whispered conversations, premature judgments, condemnations. It is the perennial climate for fear to take hold and lead us into doing and saying things that become either rolling stones or, worse still, hurled stones. It happens in the media of course, and on the internet, but it also happens in conversations between ordinary men and women; in conversations among people from all walks of life; in the family; in a community; at work. God (rightly) judges; judges (rightly) judge as in due process; but the rest of us, more often than not, can be inclined to condemn.

Henri Nouwen once coined this mantra:

Judging, criticising, condemning can rule the day, fuelled firstly by a thought and then by a word. We are treading on thin ice here, “the fretting moth of littleness of mind” as Hildegard of Bingen observes. Prudence is critical to how we move forward, in our own individual lives, in our family or community, and also as Church.

But… I must bring all of this down to an essential fact. It is ME who must be alert to my own childish games of throwing and hurling stones. Otherwise in criticising those “out there” who throw stones, I myself am actually throwing stones!

So what must I do, I asked myself, to find my way through this maze; this haze; this tricky territory? What did Jesus do with stones I wondered? Perhaps as a little boy he did what all little boys do… he rolled them and skipped them across water. But as an adult what did he do with stones? He moved them away; he cautioned other adults against throwing them, challenging anyone who has ever sinned not to throw them.

Let he/she who is without sin cast the first stone.

Jesus too rolled stones, but he rolled them AWAY FROM not towards people, and also away from tombs.

In throwing stones at others, and hence sinning, I realized that it is inevitable that I will also be throwing away Jesus the Cornerstone too, forfeiting an intimate relationship with him by my condemnation of others, by premature and unjust judgments, by sin. Jesus is the only stone in my collection that should not ever be thrown away.

This was a very sobering realisation for me. Very sobering! But then, the times are sobering aren’t they?

An American Indian Tale
A chief was telling a gathering of braves about the struggle within.
“It is like two dogs fighting inside us.
There is one good dog who wants to do the right thing
and the other dog always wants to do the wrong thing.
Sometimes the good dog seems stronger and is winning the fight.
But sometimes the bad dog is stronger and is winning the fight”.
“Who is going to win in the end?” a young brave askes.
The chief answered. “The one you feed”.

Yes, Jesus is the cornerstone and maybe if we all moved into His corner we too, in some small way, might be able to become cornerstones… of our own little community, our family or our work situation… and especially of our parishes. Our time starts now! Consultations will soon be underway for our 2020 Plenary Council. Build up rather than tear down.

Don’t hurl stones, instead become one! 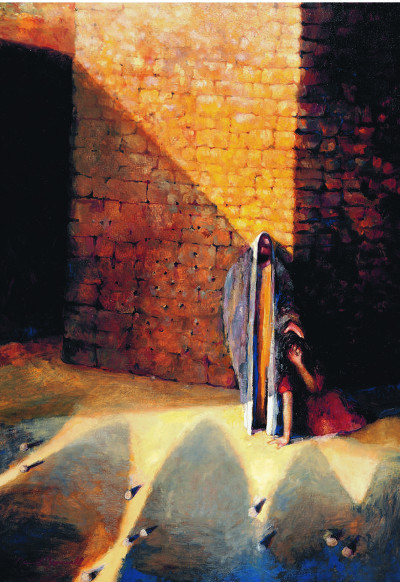 Shadow In the Middle by Daniel Bonnell