Kierkegaard, in later adulthood, set out to be deliberately provocative. He was remarkably successful! Reflecting on this as I gazed out my cell window, my attention was caught by two wild ducks, one male and one female, as they passed by, busily pecking at the grass. My heart melted with sadness as I watched them, and in an instant I had passed from having a heart disturbed by Kierkegaard's words to a heart softening with compassion for two wild ducks! And then, the quiet arrival of a third "distraction" in the form of some words of Pope Francis which have been with me for a few months.

Are these three movements of my heart connected I wondered, realizing how quickly they followed one another. I believe they are. You see I have puzzled over the connection between mercy and justice for quite some time… and still am, but perhaps some clarification is opening up now.

The words of Pope Francis that won't leave me were spoken by him in his opening address at the Synod on the Family in October last year. He said:

"Traditional and conservative bishops should guard against zealous literalism and hostile rigidity and progressive and liberal bishops should take care to avoid a destructive do-goodism and a misguided mercy that wants to bind up wounds without first treating them."

"Destructive do goodism and misguided mercy". The pope is surprisingly forceful in his words to the bishops. I believe I need to apply them to myself as well. Where do I stand on the line between conservative and liberal and how does this stance affect the way I live justice and mercy?

My mind turned to Kierkegaard again where, in "Provocations", he challenges us to be FOLLOWERS of Jesus and not simply his ADMIRERES. To my mind this is also what the Pope is saying in his words at the synod. So I started to ask myself which extreme might apply to me… traditional and conservative or liberal and progressive. Neither of these extremes comes out too well in the eyes of the pope, as both point to someone who is an admirer but not a follower of Jesus.

The middle road is indeed the most challenging, but it is THE WAY… as I see it, for myself.

Justice and mercy need to meet at the centre, where there is balance – where we are first able to heal the wounds before binding them. But oh how hard this is to do! A life centred on prayer is an absolute necessity in order to have the wisdom to judge this aright.

My compassion for the ducks came from the fact that a week ago they had five beautiful little baby ducklings pecking at the grass with them. Their babies fell prey to a magnificent eagle soaring majestically in the skies above the Abbey one moment, and swooping to carry them off the next. Nature has her lessons to teach us but how does justice meet with mercy in this situation with the eagle and the ducks? And, importantly, how do I gain the wisdom to walk the narrow road between conservative and liberal? 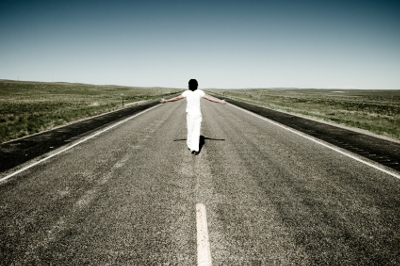 Challenging and all as it is, Pope Francis in unequivocal about this.

"Am I humble enough to patiently stitch up, through sacrifice, the open wounds of communion?"

Pope Francis, The Church of Mercy