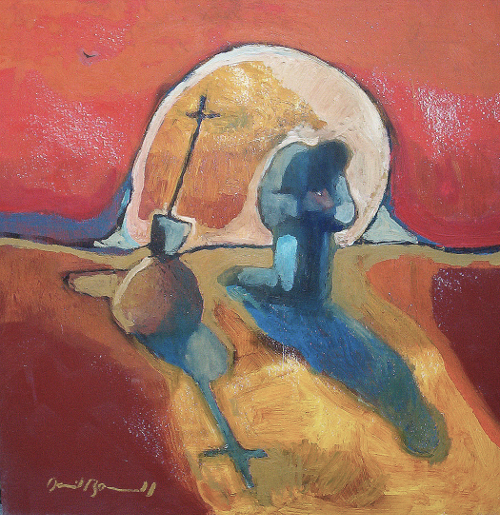 The Pearl of Great Price, a painting by Daniel Bonnell

He was six years old and deadly serious as he approached me in the classroom where I taught grade one. Lifting up his hands as he clutched whatever it was he was holding he said:

“Could you open this”?

“What’s the magic word Graeme” I answered as I smiled down encouragingly. His eyebrows furrowed in sincere concentration as he carefully considered my question. Finally, his face brightening, he confidently answered: “Open Sesame”!

It took every ounce of control I had not to dissolve into a fit of laughter as I said gently, and with all the seriousness I could muster as I struggled for self-control, “Well yes that is the magic word in the story and you are very clever to remember that”. I then went on to explain that to say “please” when making a request for help was also very important.

This happened years ago yet here I am remembering it today… with great delight. Why? What has prompted the memory of Graeme to come back to me? Maybe at a subconscious level I was resisting a message that I was being impelled to hear. I have noticed that God will often use humour to speak to me. Maybe “Open Sesame” is a message I needed to remember.

Openness is the word that has been speaking to me over and over again this year. Now I am asking myself: What does it mean for me at this stage of my life? Am I really ready (open) to receive what I am impelled to desire? Something in me sensed that I was about to be challenged.

Openness is a very important aspect of the life and teaching and healing of Jesus. He says:

Be open to contradiction

Be open to suffering

Be open to unpredictable events

Be open to not knowing

Be open to not understanding

Be open to the unfathomable

Be open to surprises

Be open to LOVE

Be open to BEING LOVED

Be open to Mystery

Be open to miracles

Be open to resurrection.

Jesus opened the door of Lazarus’s tomb in order to raise him from the dead. Ali Baba and the seven thieves used the magic words to open the door to the cave that held the hidden treasure.

Jesus, Lazarus, Ali Baba and the Forty Thieves had me pondering. Do I have a buried treasure somewhere in the tomb of my heart, a treasure that needs a “magic word” in order for it to be accessed, a door to be opened? Am I even open to the treasure being revealed, both to me and to others.

Openness is about being prepared to be out of control of my life. It is about throwing off the protective covering I have placed over my heart. It is about the treasure I have buried, the pearl of great price.

I suspect we all have our own buried treasure that we cling to jealously, a treasure that we have entombed. Jesus stood before the tomb of Lazarus and said: “Lazarus come out”. I wonder if the magic word is simply our own name substituted in place of Lazarus. Perhaps he is simply saying: “Antonia come out from your tomb”.

Is he saying this to you now too? Are we open to this message? What is the pearl of great price… our pride, our hurt, our resentment, our sin, our unforgiveness? These and many, many other treasures can lie buried in the tomb of our hearts. How willing are we even to accept that we do not have the magic word but there is one who does. That one was prepared to be open, to being opened, to openness and to opening. We too just need to be open to being opened.