Two brothers by blood went to live in a monastery. One was an ascetic and the other was very obedient. When the father told him to do this or that, he would do it; if to eat in the morning, he would eat. He was highly thought of in the monastery because of his obedience. His brother, the ascetic, was acutely annoyed at this and said to himself, 'I am going to test him to see if he really possesses obedience.'

So he went to the father and said, 'Send my brother with me so that we can go somewhere.' The father told him to go, and the ascetic took him with the intention of putting him to the test. 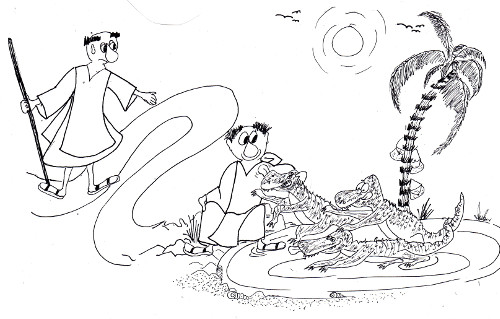 They went to the river. Now there were many crocodiles there, and he said to him, 'Go down to the river and cross.' He went down, and the crocodiles came to lick his body, but they did him no harm. Seeing this, the ascetic said, 'Come up from the river.'

But God revealed everything to the father of the monastery and how the ascetic had put his brother to the test with the crocodiles and how the dead man had come to life.

When they came to the monastery the abba said to the ascetic, 'What have you done to your brother? It is because of his obedience that the dead man came to life again.'