God sends out his Word

Well the calendar tells us it is still winter but is it right?  Are you tuned like all of God’s other creatures to know what season it is?

I think that as a human race we have lost so much of the instincts that were naturally God given to us. We rely on a weather report, a calendar, a clock to be certain of what by our own powers of observation we once were able to know. By working in the garden I have had my senses sharpened. At the moment when I step out into the ‘great outdoors’ my experience is that the August winds are dancing with the sunlight of the beckoning spring. The soil is definitely warming up because the salad green seeds are up in a week and the peach blossom is bursting out.

I encourage you to go and move about in the open air and let your spirit be embraced by whatever comes. Just give it 5 minutes a day and watch out you may soon become addicted.

Meet Flossy who is one of my youngest hens. She isn’t a modern chicken who is quick to hop into the junk food compost heap – no not Flossy she is keen only on any mulched area on the garden she can gain access; anywhere she can get her strong little feet into digging action. No fence is a barrier. The other day I picked Flossy up ready to give her a good talking to about her fence jumping habits and she went all soft, cuddling into me as if to say ‘I have been waiting for a cuddle.’ Yes I was thrown right off. She lay there while I gently trimmed a wing to prevent her high flying tricks. Well so much for that theory. Flossy left my lap and jumped back over the fence to resume her mulch scratching activity. 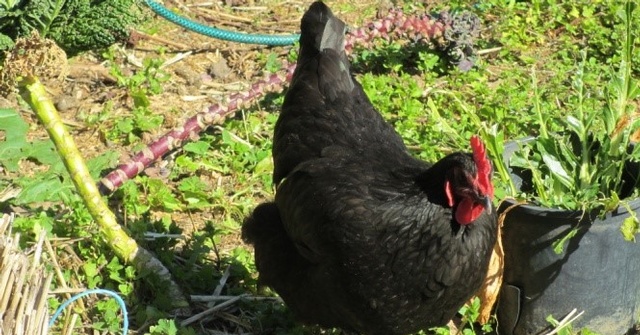 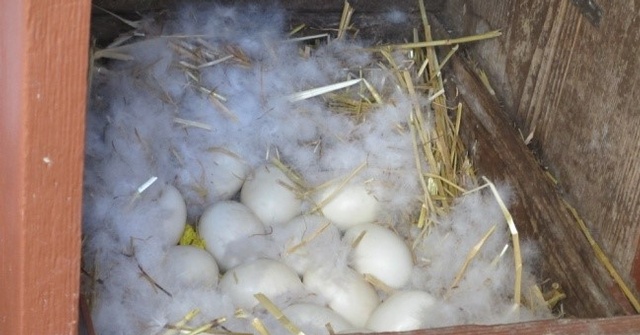 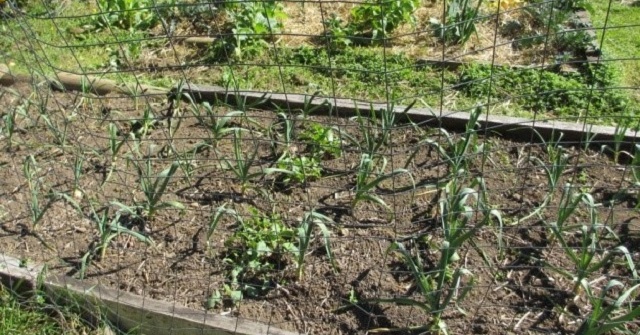 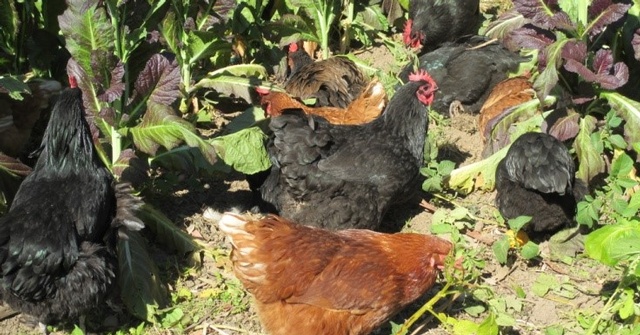 This is the design of the original doona.

What a clever little duckie and she is so proud of it. Whilst taking this picture I was being given careful watch. A third duck has started building her nest in the mulch floor of the shed too.

The Late Winter Happenings in the Vegie Patch.

The winter veggie patch is flourishing. Here you can see the garlic bed and planted between each row I have a row of lettuce, radish, carrot and English spinach seedlings just cutting through the soil. In the beds in the background there are snap peas and broad beans.

I have handed over last season’s green vegetable patch to the chickens and the site is a hive of activity. I remember when the hens first joined the team back in 2000. One day in desperation I went to Sr Elizabeth, our Abbey cellarer and said to her I needed help in the garden. Well I could see her readying herself to tell me that no other sister could be spared to help and I jumped in. I had come armed with an article about chickens in the garden. I said to her “Could I have 10 of these” and put the article on the table. In absolute relief her response was “You can have 30 of those.”

So off I went to find my new working companions. What did I know about chickens? Absolutely nothing. It hadn’t even occurred to me that they would need nests and would provide eggs. It was overwhelming to encounter that each one of them had their own personality, that they felt pain and could cry. When I brought my first ‘girls’ home they were ISA browns who had had the tip of their beaks cut off. They were originally destined for a caged existence. Some of them could barely pick up feed. The most damaged little bird I called Billy and everyday I fed Billy by hand to make sure she got dinner. During the first few weeks Billy would cry and another bird called Winnie would cuddle up close to her on the roost.  There have been moments like this when I felt just so moved by the simple goodness in the smallest of creation and by my own ignorance and insensitivity.

Emma Brown was Billy’s sister and she lived longer than all her flock. Emma was special. In fact I don’t know whether she knew she was a chicken, or whether she didn’t know I was a human. All Emma was sure about was that I was hers and she was mine. As soon as I came into the yard Emma was at my feet, beside me and there she stayed working and chatting away. When I sat down Emma would jump up onto my knee and peck at any speck I had on my clothes or skin. She couldn’t quite work out the freckles on my arms. She loved chatting to me. I just wished I could have understood what it was all about. Emma Brown lived for 6 years and how much I missed her when she died. One day I must share with you about Emma Brown and the snake.

Well since the year 2000, many beautiful little characters have worked alongside of me in the garden, taught me so much and brought a lot of joy. I hope you get to experience the sheer joy of having one of God’s creatures as a companion.

Hope you can find time in this week to immerse yourself in being one of, and one with God’s creation. God bless you and those you love.

…………it swiftly runs His Command