First Week of Lent: Reflections On Women And Angels!

I had prepared some thoughts to share with you last Wednesday… but that was before I realised I had forgotten my Tuesday appointment with the Bishop! Some of what I had prepared related to last Sunday’s Gospel and some to International Women’s Day. Even though both days have passed now, it is still good to reflect on them as the message of these two events is, in many ways, timeless.

It seems to me that International Women’s Day is gaining momentum every year. We may be oblivious to much of this momentum here in the Abbey if we are not followers of the News through various media outlets or alert to the many articles which appear in journals, newspapers and online publications. The triggers for this momentum feature both positive and negative events.

On the positive side, in many places and aspects of daily life, women now have more opportunities than ever… for participation, recognition, respect, education, opportunity, choice etc. Women’s groups are springing up everywhere offering fun, support, sharing, protest, lobbying, connection, meaning. International Women’s Day is certainly a day for us to rejoice in the many gifts, talents and qualities women have been blessed with and to acknowledge the great progress that has been and continues to be made in the opportunities we have to share those gifts.

On the negative side, however, we all know that we still have a long, long way to go before women can enjoy the fullness of emancipation and equality. Sadly, in present day Australia, one of the triggers for International Women’s Day gaining momentum has been the focus on the extent of violence against women with the shocking statistic that one in four women have or will experience some form of violence in their lives. Both women and men have been working to shine a light on this problem and women’s groups have been forming throughout the country to protest against this violence and also to lobby governments for more women’s refuges and support services for victims. Another current issue in this same vein is the marginalization and often verbal abuse of Muslim women, especially those who wear the hijab. We all remember the #I’llridewithyou campaign of a few years ago which was a really positive move but we also know that this marginalization and abuse is gaining momentum, especially with the rise of Pauline Hanson and her One Nation Party.

Other negative triggers include statistics widely published which show that women’s pay rates still lag behind men’s, women’s representation in politics, big business and in board rooms is just a fraction of men’s, and women leaders in all these areas are few and far between. Only last week, we heard the news that the Irish woman, Marie Collins, resigned from the Pontifical Commission for the Protection for Minors citing “shameful resistance” to fighting clerical sexual abuse from members of the Vatican “who do not want to change or understand the need for change”.

This year, in particular, there has also been quite a deal of publicity regarding the issue that women themselves have often forged ahead with their feminist movements to the detriment of their sisters who are indigenous or in minority groups. Eureka Street published an article on Wednesday by a young woman who spoke of the need for women’s movements of today not just to celebrate achievements of the past but also to learn from the mistakes which were made. She highlighted the fact that white women in Australia received the right to vote in 1902 but our indigenous sisters did not gain the right until 1962 and, in fact, the movement by white women to vote actually impeded the chances of indigenous women to receive the same right.

In another news clip I saw on Wednesday, Christine Legarde, the Frenchwoman who is the Managing Director of the International Monetary Fund, discussed the great imbalance of recognition and opportunity between women and men in many of the poorer countries of the world. She spoke of the fact that every day 130 million girls do not go to school. She did not hold out much hope for change in many of these countries and cultures but said that we all – women and men – need to keep working to ensure equality in every aspect of life.

These issues I am raising are but a few of those hitting the news these days but I want to suggest that they highlight a need for our continued prayer. The theme of this year’s International Women’s Day was “Be Bold For Change”. As monastic women we can embody this theme in many ways. At present, in Lent, we are endeavoring to be bold for change in our own lives and the life of our community. We know that we also support many women who come here seeking a listening ear for their troubles, help with their spiritual lives and sometimes advice to assist them in fulfilling their dreams and goals. We can write letters or lobby governments or the Vatican BUT above all, as enclosed nuns, we can pray… pray for women… women leaders, indigenous women, women in our own families, monastic women, abused women, mothers, sisters, Muslim women, women trail blazers, women who are victims of trafficking, women in prisons, refugee women…. all women!

To conclude, on a more positive note, despite all the difficulties that many women face, Wednesday was also a day for great celebration. One of you told me that on various ABC radio stations, they had women presenters on all day. Evidently one reporter went into the city asking both men and women the question: “who is the most inspirational woman in your life?” It made me stop and think and I thought it would be a good question for all of us to reflect on for a moment.

Who is or perhaps has been the most inspirational woman in your life? It might be just one person who stands out or perhaps a few who come to mind…they may be living or are now part of the great cloud of witnesses surrounding us… let’s take a minute to bring them to mind, to remember them and celebrate them….

I would like us now to turn our minds briefly back to our reflections and discussion of Lent at our last meeting. It is hard to believe that we are already into the 2nd week of Lent and I am wondering how it’s going for you and for us as a community. I am going to ask a few questions now and invite you to spend a few moments of examen with each one:

Where have you been in mind and heart since Ash Wednesday?
Have you allowed God to lure you into the wilderness?
Have you been able to hear the voice of God speaking to your heart?
What words or feelings have come to you during this time?
Have you experienced a deeper silence in our communal life?
A deeper slowness and stillness?
How can I continue to change my patterns of thinking and/or acting to enter even more deeply into Lent?

I want to conclude by sharing a refection I came across some years ago by Rev Jan Richardson. It is a refection on the Gospel for the First Sunday of Lent which always features the story of Jesus being led or lured into the desert. As well as all the trials and challenges he faced and we face in these 40 days, it also reminds us that “in the wilderness, there are angels”. In remembering the ministry of the angels, we are also acknowledging the inspirational women, we have remembered and honoured today…

At the end of this Gospel Jesus is purified of the false-self and tells Satan to Be off! Then we are told that the devil left him, and angels appeared and looked after him.

During our purification in the desert can we not expect that angels will appear and look after us? That they will lead and guide us to water, food, love and life?

What Jesus learned in that forty-day place, Lent seeks to teach us as well:
In the wilderness, there are angels.

Sometimes we need to ask for the angels. When our life leads us into a challenging terrain, by chance or by choice, this is not always the time to rely on our own devices, to attempt everything by ourselves. Yet it is in these times that the most crucial skills may become the most elusive. When we are pressing hard to find our way and be in control, it can be difficult to stop and seek what will restore us, even when we are aching for sustenance and for rest. This is when we need to learn to ask. This is when we need to begin to discern what could help, and who could help, and where we could turn for that help.
In the wilderness, there are angels.

Sometimes when the angels come, they open our eyes to what is already there. I wonder if, in Jesus’ time in the desert, he thought of Hagar, driven into the wilderness not once but twice by Sarah and Abraham. In Hagar’s second wilderness journey, the water runs out and Hagar’s son, Ishmael, is dying. God and an angel come to their aid, opening Hagar’s eyes to a well of water that has been there all along. They drink; they live. Their story compels us to wonder – Where do I need to open my eyes? What sustenance is at hand that I have not been able to see?
In the wilderness, there are angels.

Bread
where there was
no bread.

Water
where all
had been dust.

And we opened
our eyes
and we saw.

And we opened
our hands
and received.

And we opened
our hearts
and were glad

For the angels…. and the inspirational women
who wandered
our way.
Amen.” 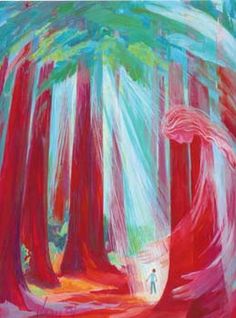