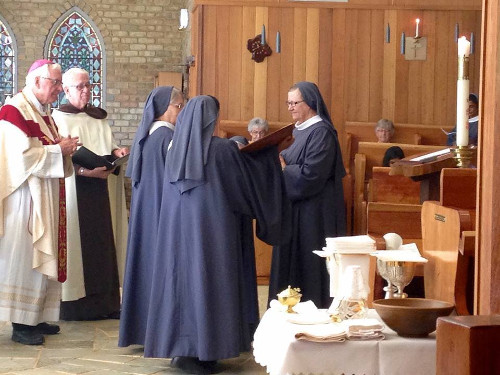 The Feast of the Presentation of Jesus in the Temple on 2nd February is always a special day for us as it is our Foundation Day. This year, it was doubly special as we celebrated the solemn monastic profession of our Sr Hannah Massy-Greene. Bishop Peter Ingham joined us for the occasion and presided at the Eucharist which incorporated the blessing of candles for Candlemas and the Rite of Solemn Monastic Profession.

It was a deeply moving celebration and we all felt the powerful presence of the Holy Spirit throughout. A sense of deep joy was also palpable as community, family and friends gathered to share this significant moment in Hannah's journey. Two of her adult children, Pippa and Alex, were present along with her granddaughter, Bethany and Hannah's oldest brother, David. Her other two children, Georgie (who lives in Cambodia) and Jeremy (who is working in Germany), were unable to attend but were rejoicing with her in spirit and sending their love across the seas. Jeremy was able to take advantage of 21st century technology and viewed the ceremony via Skype, despite it being the middle of the night in Berlin. Hannah wore a prayer cross given to her by Georgie so that she and her family could also be "present".

The liturgy was followed by a delicious lunch which concluded with the cutting of the cake. One of the guests from Hannah's choir days stated in a Facebook post later that day that the "beef rendang was to die for" so much so that he thought he might have a vocation to monastic life as well!! We thank our Oblate and friend, Cecilia Larkin for the preparation and cooking of the food we all enjoyed so much.  Thanks also to our friends, Dot and John Touzel who provided slices that were delicious. 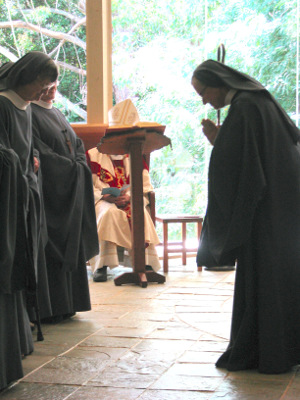 In her speech, Hannah spoke of her gratitude to our Abbess, Mother Mary, who received her into our community and supported her vocation throughout her formation, to Sr Antonia who was her Novice and Junior Mistress and to the Sisters of the Good Samaritan who always encouraged her to pursue her vocation. Finally, Hannah spoke movingly of her gratitude to her children, above all, who have given their blessing to their mother in her decision to pursue her monastic vocation and who have encouraged her all the way… an extraordinary gesture of love. Sr. Hannah shares her vocational journey with the following reflection:

Looking back over the influences in my life that have led me to be here at the Abbey, the clear message that I have been receiving (but failed to acknowledge until now) is that my home is as a Benedictine within the Catholic Church. Let me explain.

My family were/are Anglican but were never regular church attendees apart from Christmas and Easter. (We used to joke that we were C & E rather than C of E!) I, on the other hand, grew up knowing that I am a child of God, loved and valued – a gift of pure grace. From an early age I would sneak into churches and sit quietly, content to just be there.

On my walk to and from school I would take a short-cut through the grounds of the Catholic church next door to the Dominican convent in Warrawee, Sydney. I was fascinated by the laughter I heard coming from behind the high walls of the convent. One day one of the priests invited my friend and me to go into the church with him. He was incredibly kind, answered our questions and showed us the vestments and linen. I was enchanted! But of course those were the days of sectarian prejudice and suspicion. One of my mother's brothers converted to Catholicism and this was the cause of tension in the family. I knew enough not to say anything to my family and kept it to myself. My longing for God grew.

In my first year of high school I approached my divinity teacher and told her that I believed that I was called to be a nun. It turned out that she was about to go on retreat with the Community of the Holy Name in Melbourne and on her return brought me a vocation pamphlet. I kept that pamphlet, hidden from my mother, for several years. However, while I read and re-read it, I knew that the apostolic life of this order was not what I was seeking. Even at this early stage, I knew that I was called to a life of prayer.

At about the same time we moved to a new suburb and I became very involved in the local church youth group and starting singing in the church choir. This was the era of the Billy Graham Crusades in Sydney and everyone was caught up in the fervour of conversion. Often I would be asked "Have you accepted Christ?" or "When did you accept Christ?" While I understood the stance of the questioner, they were questions that I simply could not answer. Not because I couldn't give an answer, but because I knew that my answer would not be acceptable. For me, my turning to God was not a once-off event; it was a life-long journey, begun at the time of my baptism, only to finish at the moment of my death. How or why I knew this, I cannot say. I can only repeat that it was a gift of pure grace.

Sometime during high school I saw a documentary on the ABC program "Checkerboard" about a young woman who was preparing to enter the Poor Clares. This, I knew, was the sort of life that I yearned for but didn't know how to pursue, and in truth was too scared of the family repercussions if I tried.

Well, by this stage I was well into my teenage years, and I discovered boys and, you might say, the hormones took over! But I was still attending church each week and singing in my church choir.

I was married in 1976 and spent the next fifteen years in Deniliquin and Albury, in the south of New South Wales. Here I found an Anglican Church quite different from the one that I had grown up in. The theology and the liturgy were sacramental and the preaching was geared less to conversion and more to growth in the life of the Spirit. Although I was married with a growing family, I became more and more convinced of a call to serve God in some form. I wondered if I was called to ordained ministry (now an option for women in the Anglican Church) but deep down knew that this was not for me.

Following the breakdown of my marriage in 1991 I returned to Sydney and started to attend and sing at Christ Church St Laurence, an Anglo-Catholic parish in the centre of Sydney. CCSL is an extraordinary parish with a reputation for wonderful music and lavish liturgy, all done for the glory of God. It was also a church which attracted wonderful preachers and teachers from across the denominational boundaries — I remember hearing Fr Herbert McCabe OP preach a wonderful sermon on the Mass.

Furthermore it is a parish known to produce and foster vocations. I was leaving church one Sunday when the priest took me aside and, giving me one of his piercing looks, placed a small booklet in my hand saying "You need to read this." The booklet was a copy of the Hound of Heaven by Francis Thompson. I have it with me still.

Soon after, in December 1993, I went on tour with the choir to Germany, France and England. There we sang in many wonderful cathedrals and churches — the Limburger Dom, St Hedwig's Cathedral, Berlin, the Hofkirche, Dresden, Würzburg Cathedral, Notre Dame, Paris, Winchester Cathedral — but it was our visit to the Abbey of St Hildegard in Eibingen that was life-changing. The atmosphere of prayer was palpable: truly God was present in that place. I walked into the Abbey and it was as if God was waiting for me and asking me why I had taken so long to arrive!

From that moment I knew that I had found my path and had to follow it. The following year I visited Jamberoo and then St Mark's Priory (as it was then) in Camperdown, Victoria. In 1996 I became a novice oblate of the Priory and started to come here to the Abbey for spiritual direction. My sense of vocation to vowed life increased with the years. On the other hand, I had to fulfil my commitments to my four children. I often railed against God for presenting me with such a strong desire without the possibility of fulfilling it. However, it is now that I can say that it was my growth in understanding of Benedictine spirituality and living the life of an oblate which helped me through long and difficult years.

In 2007, two years after my youngest son had left home, I entered the Anglican Benedictine community at Camperdown. Sadly it became increasingly clear that my vocation was not to that community. In November of 2009 the Abbot decided that I should come to Jamberoo for a period of time. I was most reluctant to do so and almost left. However, Sr Joan Ryan sgs, my spiritual director at the time, counselled me that I should come, as she said that she was sure my coming here was "of God".

Almost from the moment of my arrival here, my doubts about my vocation and my unhappiness disappeared. I am now sure that Joan was right and that God has led me here to Jamberoo.

This is an amazing community. It is a place where I have been supported, challenged, stretched and loved. It is a place of deep encounter with God, in our prayer, our work, our guests, as well as in each other in community. It is a place of failure and success, of reconciliation and renewal. It is a microcosm of humanity in all its frailty but also in its strength. We are individually so different and that diversity is celebrated and even encouraged – all for the glory of God. Truly the whole is so much greater than the sum of the individual parts. I am enlarged and my heart is nourished by being here. I know that I would be diminished if I were not.

I am so grateful that God led me here. It is a privilege and an honour to be a Jamberoo Benedictine.