There is a season for everything under heaven. Right now it's bee season and here at the Abbey we have just experienced an amazing sequence of events. 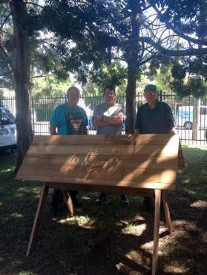 On 5 December I collected our second Kenyan Top Bar Hive box from the Illawarra Woodworkers Inc, beautifully crafted by this group.

The following day, Sunday, Sr Veronica and I put the hive in place between banana trees in the Abbey Farm. This hive was sponsored by Sandra Cooper, Sr Magdalen's aunt. Sandra was here at the Abbey that weekend making her commitment as an Oblate.

On Monday morning I woke up wondering where I might find a package of bees for this new hive. My wondering stopped suddenly about 3 hours later when I received a call from Birdie (who was volunteering in the farm on the day) telling me she had found a swarm in our farm grapefruit tree, only about five metres from the new hive.  It seems the bees found us!  Sr Veronica and I placed the swarm into the new hive. It was our first swarm capture and it was a beautiful experience. Smiles abounded as we welcomed Queen Magdalen and her royal subjects to her new home.

All seemed to go very smoothly. Sandra was thrilled to know her sponsored hive had been created during her visit.

The next morning I found the hive empty. The colony had gone just as quickly as they had arrived. The disappointment was heavy as we scratched our heads asking ourselves "Why is it so?". We reviewed everything in great detail. I just couldn't tell Sandra and just as well I didn't because on Friday morning the little swarm came back. Sr Mechtild, who works in the farm, found them hanging in the lemonade tree directly above the same new hive, with some bees flying in and out doing a property inspection. Sr Veronica placed them into the hive and there was much rejoicing and even more questions… The mystery was mostly solved for me later that evening when the weather changed dramatically and a storm hit with wind, thunder, hail and rain. Our mentor Adrian Iodice commented, "The bees always know". They are great barometers. They must have known then that they needed shelter and so had another look at our hive.

The new colony has settled in well and went straight to work building beautiful comb so that Queen Magdalen could lay her eggs and build up the new colony. They created four small combs in three days. A wonderful start!

Three weeks later, at the end of the month, these combs are much larger and are home to baby bees being incubated and cared for by the nurse bees, with some of the comb filled with nectar to feed them. What a beautiful gift this whole experience has been.

So, what is a swarm anyway? Well it is often a new queen with a portion of the colony that have left with her and they are scouting for a new home. It is the only time when bees rest. They hang together in a ball, with the queen somewhere safely in the middle to protect her. They hang linked together with their flight engines turned off. Their bellies are usually full as they fill up before they leave for this important journey. While they hang quietly, several scout bees go off looking for a potential new home and they come back to the swarm to report their findings in what's called the Waggle Dance. The little dance reports to the swarm how good the potential new home is. The duration of the figure 8 dance and the noises the scout makes tells the swarm a lot about the site, such as how far away it is, the direction to go to find it, and how safe it is. That's important because there's actually a real estate market going on here and the best home will win!  The scout's job is to interest the swarm enough so that some bees will go and have a look. The original scout has left scent to mark the new spot so the bees can find it. Each scout will go through this process on return to the swarm. If one scout reports on a site that has already been reported on or isn’t safe, the bees will stop the waggle dance by bumping heads with this scout. More bees go and check the new site and come back to report and eventually somehow a consensus is reached. A bee will then send a "get ready" signal to the swarm. It crawls through the swarm with a "start your engines" message and the bees in the swarm then start to warm up their flight muscles in preparation. Then a bee will give a "let's go" signal and they suddenly all leave together flying to their new home, guided by the bees that know the way. Once they arrive, they get straight to work, cleaning the hollow, sealing any gaps and starting to build comb. 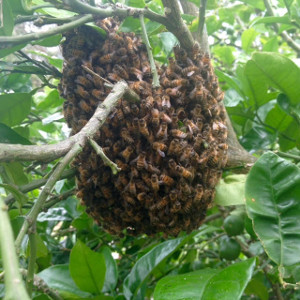 A swarm is a beautiful thing. It's a colony of bees at rest. It is new life emerging, an essential part of the survival of bees. It has been an honour for us to see one arrive and choose a home here.

As 2015 draws to a close we have four hives in our new apiary. What a remarkable year. Thank you to our sponsors who are enabling this beautiful project. Thank you to the Illawarra Woodworkers Inc for building the Kenyan Top Bar Hives and thank you especially to our mentor, Adrian Iodice from Beekeeping Naturally, whose incredible knowledge and gentle guidance are essential. And thank you to the Benedictine community who have embarked on this exciting project.

Please consider joining us for natural beekeeping training in 2016. Course dates and bookings are available on Adrian's website or facebook.