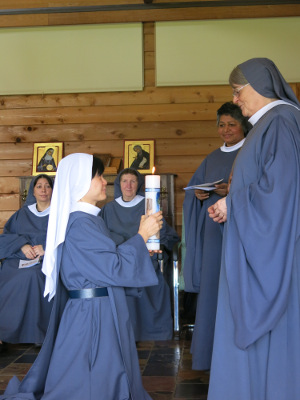 Christine Dorothy was clothed in the monastic habit on 5th February 2016.  The ceremony was combined with the Office of Terce at 11.00 a.m.  After the formal questioning, Mother Abbess clothed Christine in the habit of the community and announced that the name Christine has chosen as her religious name is Petra. Christine has a very special love for St. Peter, with whom she is able to identify in many ways, and so he is to be her patron.

After Sr. Petra had presented herself to each member of the community to receive the formal kiss of peace we shared a celebratory morning tea together amidst great rejoicing.

Christine Dorothy was born in Indonesia, the eldest of four girls.  Her parents still live in Indonesia and her sisters are living in various other parts of the world.  After graduating from university with a degree in Computer Science and Knowledge Engineering Christine spent some years working in Singapore before  migrating to Australia where she worked in IT.

Christine became very involved with the Holy Spirit Parish, North Ryde, working as a volunteer with the youth of the parish. She came to the Abbey on three different occasions to spend a few weeks living with the community and discerning her vocation.  After three years, when she felt the time was right, she asked to enter and was received into the postulancy on 31st May 2015. 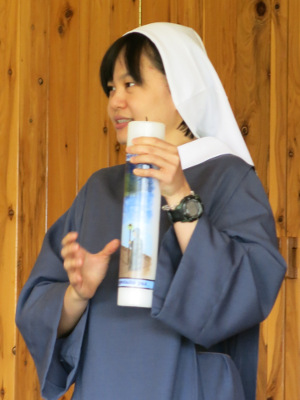 On 5 February I was clothed in the Monastic Habit.  For me, receiving the holy habit is another step of growing in my relationship with God.  During the retreat in preparation for the clothing, a particular reflection spoke to me most deeply.  It was the passage from John 4 about the woman at the well whom Jesus asked for water.  Jesus said to her, "If you but knew the gift of God and who it is that asks you for a drink, you would have asked Him and He would have given you living water. … Indeed the water I give will become a spring of water welling up inside you."

In my reflection, I felt God was speaking to me personally, "If you but knew the love of God and who it is that asks you for your love, you would have asked Him and He would have given you a life-giving love."  I heard His promise to me that when I trust Him, He gives me a love that will fill me up and well up in me which I hope will overflow to those around me so that every person I meet will feel God's presence and love for them through me.

As I put on this new life, I took on the name Petra.  Petra is a feminine version of the name Peter.  I have always loved St Peter.  For me he is the patron saint of making mistakes.  He knows what it feels like to be a failure.  Though he loved his teacher and best friend, Jesus, he in his weakness did and said things which were not quite what Jesus was happy about.  But Peter also knew what it meant to listen to Jesus, to trust Him enough to accept His forgiveness and love and to start again.

Even though I want to love God, I know I am unable to love Him enough.  Therefore I rely on Him to enable me to love Him.  I know that one of the ways He is helping me is through the people around me.  In a special way He has worked through my sisters in this Benedictine family in Jamberoo to learn to love Him more.  I am very grateful for them and for all those who have prayed for me and supported me in my vocation journey.