Today is an unstructured day but there was great activity in the kitchen and an air of expectation and excitement was evident as LeeAnn (our oblate who lives on the property and works for us in our craft department) and Sr. Veronica harvested the first batch of our Abbey Honey. This bee project began midway through 2015 with four hives being installed. LeeAnn had asked Mother Mary’s permission to keep bees and Mother decided we would attempt to make enough honey to sell in the shop. Sr. Veronica was appointed to assist LeeAnn in the project. Gradually, within the next year, we will be adding more hives. 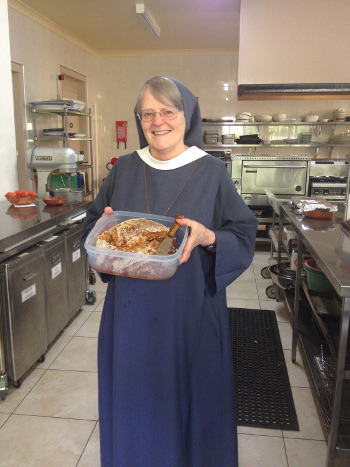 But today was the big day for the first bar to be brought over to the kitchen. Anyone lucky enough to appear as the honey was being extracted from the wax, was given a taste. The general consensus was that it is truly, truly delicious!