The O Antiphon: O King of The People

O King of the peoples
and goal of their desire
cornerstone uniting Jew and Gentile:
Come and save us, whom you made from the dust of the earth.

This is a beautiful antiphon containing many images which unfold simply and gently, revealing the type of king who was both expected and desired. We know from the Gospels that Jesus was reluctant to be called or hailed as a king. But his kingdom, was “not of this world” meaning that he would not be the type of king people expected, one who stood apart, ruled excessively or lorded it over his subjects, nor would his kingdom be like any earthly one they might have experienced. 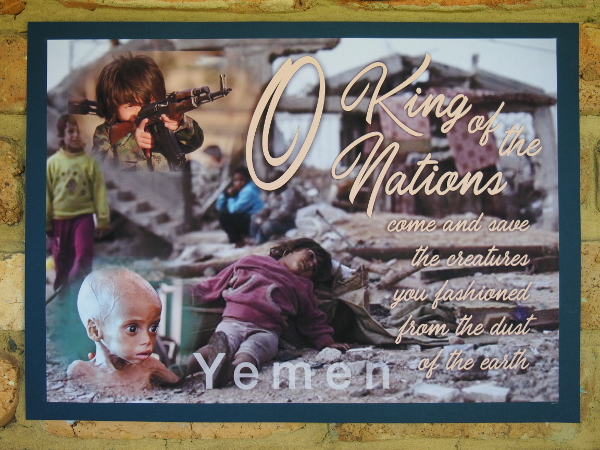 O King of The Nations, come and save the creatures you fashioned from the dust of the earth

How the people of Yemen, for whom we are praying today, must long for a king and a kingdom like this. Their land and their homes, though poor, were their kingdom and the people were happy but now, warring rulers and a Saudi Government which has bombed the country beyond recognition, have left so many without family members, homes, livelihood, food, medicine and aid. And, as always, it is the children who are suffering the most. The faces of these children which we see on our poster and on the screens in our News bulletins tear the heart from us.

Into this desperate scenario, tonight, we pray with Advent hope once again. We pray it for the people and especially the children of Yemen. The King of all the peoples, calls on us to join him in bringing about his Kingdom, a Kingdom where all shall be one and peace, justice and love shall reign. We call on him to come and help his beloved people, to comfort them, to save them. With them, we pray and we plead, Thy Kingdom come in Yemen, thy will be done, on earth, as it is in heaven. Amen.

O King of the peoples
and goal of their desire
cornerstone uniting Jew and Gentile:
Come and save us, whom you made from the dust of the earth.