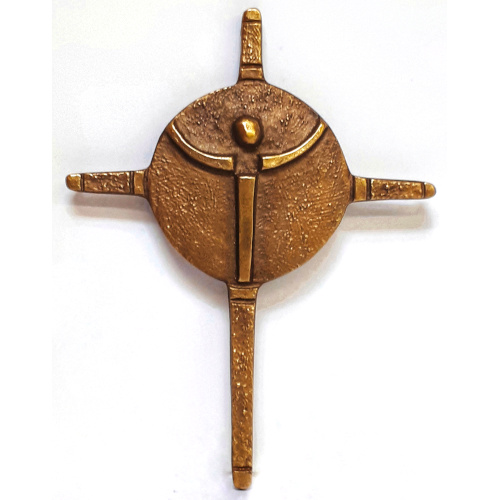 This Modern Risen Christ Cross honors RCIA candidates being received into the Church. This solid bronze cross celebrates Christ’s definitive victory over death.  As such, it is a most appropriate baptism, confirmation, and first communion gift.  This cross is also an excellent ordination gift.

A Solid Bronze Cross from Germany

This solid bronze cross depicts the Risen Christ simply and abstractly. This cross was conceived and realized in Germany by a master bronzesmith. The Resurrection of Christ from the dead – the death of death and the birth of new and eternal life – is depicted here compactly and eloquently.

The Resurrection from the Dead

The simplicity of this cross betrays the depth and profundity of the reality depicted here:  The Resurrection of Christ from the dead.  This central tenet of the Christian faith has confounded many philosophers, not a few theologians, and the whole world of scientific inquiry down through the centuries.  Saint Paul has given us the most profound reflection on the meaning of Christ’s Resurrection from the dead in chapter 15 of I Corinthians (go to History/Story tab)  where he assures us that death, Christ’s death, our death, has been swallowed up in the victory of the cross, in Christ’s victory over death once and for all. This cross is a gift worthy indeed of this awesome truth that death is not the last word for those who believe in the Resurrection of the Dead.